What is P2P Business Lending

Debt–based transactions between individuals and existing businesses – which are mostly SMEs with many individual lenders contributing to any one loan. 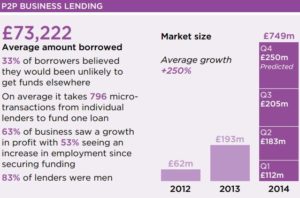 The market has more than tripled in size since 2013

P2P business lending facilitates secured or non–secured business loans between individual lenders to mostly SMEs. Over the last two years P2P business lending has experienced an impressive growth, with a 288 per cent increase from the £193 million in 2013 to a predicted £749 million in 2014. This growth can be largely attributed to the strong expansion of existing industrial players as well as the recent proliferation of this business model underpinned with the emergence of many new and diverse entrants into the market.

One of the fastest–growing markets within the P2P business lending model is secured lending for real estate mortgages and developments. For this particular section of the market, which was analysed separately, we found that the average business loan amount is considerable higher at £662,425 with an average loan term of 10 months.

In addition to looking at transactional data from platforms, we also surveyed 1,771 lenders and 323 business borrowers who have used P2P business lending, to attain further insights on their behaviour and views on alternative finance. The survey results mirror the findings from the platform data with 30 per cent having lent between £1,000 and £5,000 and 26 per cent having lent between £5,000 and £20,000. It is however interesting to note that almost 23 per cent have provided loans in the range from £20,000 to £100,000. Also corresponding to the findings from transactional data from platforms, our survey demonstrates that P2P business lenders do actively diversify their lending portfolios. One in four P2P business lenders has lent to more than 100 businesses, and 45 per cent have lent to between 20 and 100 businesses.

P2P business lending is primarily used by men who are 55 or older. Eighty–three per cent of surveyed lenders, and 74 per cent of borrowers were men. Fifty–seven per cent of lenders were 55 or older. They were also quite wealthy with a third having an annual income in excess of £50,000.

The majority of P2P business lenders learned about this alternative finance model through online advertising (28 per cent) and online intermediaries such as MoneySupermarket (25 per cent). When budgeting for lending through P2P business lending platforms, it is clear that the money primarily comes from lenders’ investment budget (54 per cent) or their savings (45 per cent). Very few people (less than 2 per cent) have lent money they would otherwise use for day–to–day spending.

Lenders are primarily motivated by the financial return available

Unlike the donation and reward–based fundraising, the opportunity to use the P2P business lending model to support a specific sector or industry, supporting friends and family or supporting a social cause was of relatively low importance to the majority of lenders. Furthermore, it is interesting to observe that almost none of the P2P business lenders had personal connections to the businesses they lent to, with 97 per cent saying their first loan was to someone they didn’t know.

We also asked those lenders who have set up accounts with P2P business lending platforms but have yet to make their first loan (5 per cent of all surveyed lenders) what would make them start lending. The key issue ranked important or very important by these potential lenders was uncertainty about the creditworthiness of business seeking loans (73 per cent of respondents). Uncertainty about how the model worked was not one of the more cited factors with 35 per cent saying this was ‘important’ or ‘very important’. Inactive members highlighted more information about businesses seeking loans (13 per cent), greater tax incentives (31 per cent) and more information about risks associated with lending (11 per cent) as three key factors that would make them begin lending. Finally, 58 per cent of the surveyed inactive lenders indicated that they would start lending within the next 12 months.

P2P business lending is funding many borrowers who would otherwise struggle

Growth of model likely to continue in 2015

The rapid growth of P2P business lending is illustrated not just by the increasing amount of money lent to businesses via the model in recent years, but also by the number of people and businesses who have only just started to use the platforms to lend and borrow. More than 69 per cent of P2P business lenders surveyed have begun using the model in just the last two years with half of these starting since the beginning of 2014. Similar trends exist on the borrower side with 48 per cent of the businesses responding to the survey having first borrowed in 2014 and 40 per cent in 2013.