You are here: Home / News / Alternative Finance in the UK – Everything you need to know

The alternative finance market in the UK is expected to exceed £2 billion of funding provision by the end of 2016. Alternative finance covers a variety of new financing models that have emerged outside of the traditional financial system, that connect fundraisers directly with funders often via online platforms or websites.

What do we mean by Alternative Finance?

Alternative finance is an umbrella term that covers a range of very different models from people lending money to each other or to businesses, to people donating to community projects and businesses trading their invoices.

The distinctions between these models are important as they differ enormously in the types of people and organisations that use them, why they use them and the nature, form and amount of financial transactions that take place.

Below, we try to give an understanding of each platform and their use: 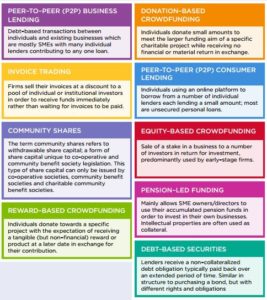 The motives behind fundraisers turning to alternative sources of finance also vary depending on the model.

In a similar vein, the motivations for funding also differed significantly across the industry.

The socio–economic impact of alternative finance

By December of 2014, the UK alternative finance market had provided working, growth and expansion capital to an estimated 8,000 SMEs as well as crucial funding for hundreds of community and voluntary organisations across the country.

Presently, over 100,000 people will have acquired personal loans from P2P consumer lending platforms, of which many are sole–traders borrowing money for business purposes. The importance of the alternative finance market was also highlighted in the surveys of users of alternative finance platforms, where many fundraisers stated that they would have struggled to source funds otherwise.

Since successfully raising finance, individuals and businesses have seen a variety of positive impacts:

As well as the funds provided, crowdfunding is helping increase volunteering and social action: