What is Reward-Based Crowdfunding?

Individuals donate towards a specific project with the expectation of receiving a tangible (but non–financial) reward or product at a later date in exchange for their contribution. 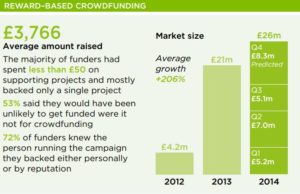 The reward–based crowdfunding market grew to £26 million in 2014

Reward–based crowdfunding is probably the model that has really captured the public’s imagination and media’s attention, and it is the type of alternative finance that registered the highest usage rate (eight per cent) in our national consumer poll among all surveyed models.

Reward–based crowdfunding has seen a steady increase of 17 per cent in 2014 from £20.5 million in 2013 to over £26 million in 2014. Analysis of transactional data worth over £30 million between 2010 and the first quarter of 2014 shows that the average size of the reward–based fundraising campaign is £3,766 with approximately 77 backers per campaign and an average donation of £48.92. The average crowdfunding success rate across seven surveyed reward–based crowdfunding platforms is around 35 per cent. On average, a successful campaign took 28 days to reach their funding target.

From the survey of 191 fundraisers and 1,128 backers who have used reward–based crowdfunding, it is clear that those seeking to fundraise in the UK through this model are predominantly those in the social sector or creative industries. They tend to be small operations, often individuals with little trading history and modest if any turnover. They had chosen reward–based crowdfunding as a potential source of finance to have more control over the project (important or very important for 78 per cent of respondents), raise funds on their own terms (66 per cent), to access the non–financial benefits that crowdfunding can provide (71 per cent) and for the transparency (71 per cent) and speed (68 per cent) of the funding process.

Most backers use reward–based crowdfunding to fund people they know

When choosing which campaigns to back, more than 60 per cent of backers valued the quality of the idea, the team and knowing their money was making a difference. Funders were also quite influenced by personal recommendations from people they knew.

Backers reported that the money they used to fund projects would otherwise have gone towards day–to–day spending, rather than savings or investment. Very few backers (less than 10 per cent of those surveyed) viewed their support as an investment, but rather as a chance to support worthwhile projects.

Social media and social networks are key to fundraising success

The principle difficulties fundraisers faced when sourcing funds were finding backers and developing campaign material. Corresponding to how backers reported finding out about fundraising campaigns, fundraisers listed social media and their existing social networks as the most effective routes to reaching potential backers, with offline promotion the least effective. Just over half of fundraisers stated they would have been ‘unlikely’ or ‘very unlikely’ to raise funds without crowdfunding, a further 21 per cent did not know if they would have been able to do so or not.

Three in four unsuccessful fundraisers would try it again

Those who failed to reach their crowdfunding target put their lack of success down to not getting their community or network sufficiently engaged with the project(rated an ‘important’ or ‘very important’ factor in their lack of success by 80 per cent of respondents), not generating enough momentum in the campaign’s early stages (74 per cent) and trying to raise too much money (50 per cent). Despite this, three quarters of surveyed fundraisers would try it again or recommend this model to someone else seeking funds.

Looking at the impact, 29 per cent of the fundraisers reported an increase in employment, 49 per cent an increase in turnover and 37 per cent a growth in profits since obtaining finance through reward–based crowdfunding. Two–thirds also reported having completed their project or launched a new product or service and getting more engagement from supporters. Related to this, three–quarters of fundraisers reported that they benefited from accessing the networks of their funders and around the same proportion said their backers provided assistance with marketing and advocacy of the project.

The majority (70 per cent) of the successful fundraisers used the model for the first time since the beginning of 2013, providing further evidence to this being a very young market, with lots of people raising money for the first time in recent years. Successful fundraisers viewed reward– based crowdfunding quite positively and 92 per cent would recommend the model to someone else seeking funds. 81 per cent of them would approach reward–based crowdfunding again in the future should they need more finance.