What is invoice trading?

Firms sell their invoices at a discount to a pool of individual or institutional investors in order to receive funds immediately rather than waiting for invoices to be paid.

Invoice trading provides fundraising opportunities for small and medium enterprises to trade their invoices or receivables at a discount in exchange for the speedy procurement of working capital.  In 2014 the sector grew by around 169 per cent and in 2015 it saw a further growth by 179 per cent. The average invoice auction duration is just eight hours with the average traded invoice value being £56,075. In the majority of cases, a trade invoice only takes seven micro–transactions to complete, signifying the participation of high net worth individuals and institutional investors in this model. 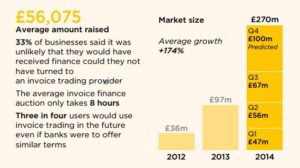 A relatively small sample of 24 businesses responded to our survey of users of invoice trading, therefore the results that follow should be interpreted with caution. The surveyed SME borrowers were spread across a diverse range of sectors with ‘technology’ and ‘business services’ being the most common. More than half of the respondents were based in London or the South East but there were respondents from almost all regions in the UK.

The businesses using the invoice trading platforms tended to be small with over 90 per cent of them having fewer than 50 employees. Yet these are not necessarily young businesses. Over 40 per cent have been in business for over ten years. A third were less than 5 years old and almost all had a turnover of more than £200,000 with half having a turnover of more than £1 milion.